LAGI 2018, the Land Art Generator Initiative competition in Melbourne, is an international contest which invites designers to create large-scale, site-specific public art that generates clean renewable energy for the city. For their submission, our friends at Olson Kundig have designed a gargantuan solar sail which can produce 1,000 megawatt-hours of clean energy. Called “Night and Day” it is powered by solar energy and pumped hydroelectric energy storage. The Land Art Generator Initiative was launched as part of Victoria State’s Renewable Energy Action Plan to meet Melbourne’s 2020 net-zero energy goals. This power plant project is proposed for St. Kilda Triangle on Port Phillip Bay, and if implemented could power as many as 200 homes 24 hours per day without creating emissions: in the daytime, the photovoltaic panel-clad curved sail would collect energy, which then powers a pump that channels water into a suspended hydro battery. 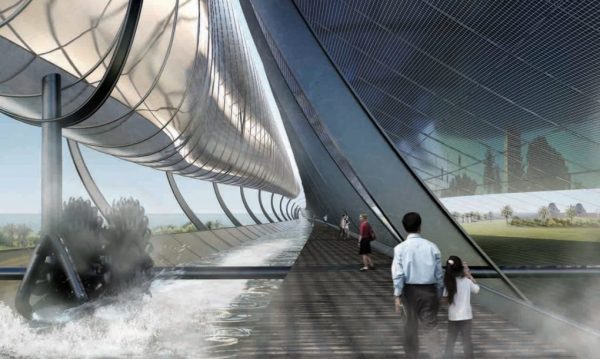